THE WALLS AND GATES OF LUCCA

For security reasons, each of the four gates had a postern (a concealed door for emergencies). 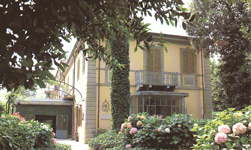 A second set of walls was built around Lucca in the 12th and 13th centuries to include the districts of the churches of Our Lady Outside the Walls, St. Pietro Somaldi and St. Frediano. The walls were made up of square stones in even rows; they were approximately 11-12 metres high, defended by crenellated towers and complete with a drawbridge and enormous wooden doors.

Two of the four gates still remain today: Porta San Gervasio, with a single high archway, and Porta Santa Maria dei Borghi, with two archways. The remains of these walls are grandiose, and are evidence of how Lucca must have flourished in the Middle Ages, thanks to the wealth it created from its trade, its banking activity and its silk production.

A third set of walls was completed later, built at different moments in time and by different architects, who limited themselves merely to enlarging the existing perimeter of walls (which is still the same today), and building large circular keeps to the south and the west.

FROM THE 16TH CENTURY TILL TODAY 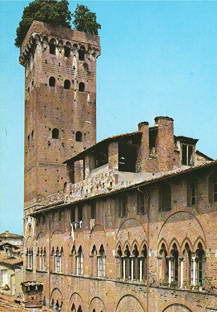 From the 16th century onwards, the Republic financed further work on the fortifications (to which many private citizens also contributed), supervised by a special Fortifications Office, set up in 1518. A large number of engineers were involved in the first works, but they did not follow a unified plan, which resulted in changes being made to the part of the walls that had already been built. It was not until the end of the century that another group of engineers gave the walls their present, typically Italian, ramparted appearance. By 1645 the circle was almost complete, the finishing touches were entrusted to Paolo Lipparelli and the whole project was finished in 1650. In their definitive form, the walls are 4.2 kilometres long, made up of eleven sections, ten bastions and a platform (St. Frediano). The bastions jut a long way out from the sections of wall, and they are all provided with underground rooms for ammunition and food stores; access to them was by a flight of steps on the inside of the walls or by spiral staircases leading directly down into them from the bastions.

On the outside of the walls there was an impressive defensive system, comprising a 35-metre moat, an embankment which defended the road outside the walls and twelve ravelins, or outworks, standing on brickwork bases (two of which are still visible today on the north side).

The various gates in the walls are all of a different style, due to the fact they were designed in different periods of time, by engineers belonging to different cultural backgrounds.

Porta San Pietro (St. Peter’s Gate) was completed in 1566 and was designed by Alessandro Resta. Above the entrance arch he placed an image of St. Peter and above that he inscribed the coat-of-arms of the Republic of Lucca with its motto “Libertas”. The side passages in the gateway were added much later, in 1864. 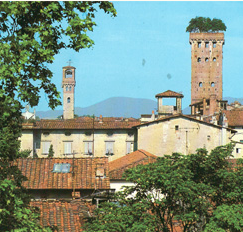 Porta Santa Maria (Our Lady’s Gate) was built in 1593 with a single archway; it was designed by Ginese Bresciani, who decorated it with a marble sculpture of the Madonna and Child. On either side there are two panthers bearing the coat-of-arms of Lucca; these replaced the two lions which the architect had put in his plans and which the Senate had expressly asked to be replaced. The two side archways have only been opened recently.

Porta San Donato (St. Donato’s Gate) dates from a later period; it was in fact only begun by Muzio Oddi in 1629. Designed in brickwork, it is embellished with elegant marble strips and squares. In comparison with the gate which existed before it, this gate is situated a long way in front of it, as it was at this point that the town expanded, and the walls were built further out compared to the previous ones.

The previous gate, built in 1589 by Vincenzo Vitali, can now be seen in the middle of Piazzale San Donato. 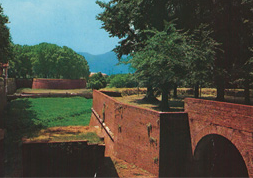 The fourth gate, called Porta Elisa (Elisa’s Gate) dates from 1804, and was built in neoclassical style at the wish of Elisa Baciocchi, Napoleon’s sister, who wanted to make an opening in the city walls to the east, on the site of the old Roman “decumanus maximus”, wich had been blocked off in the 16th century for defensive reasons.

The other two gates which can be found along the perimeter of the walls today are Porta Sant’Anna (St. Anne’s Gate) and Porta San Jacopo (St. James’ Gate), both of recent construction.

As a matter of fact, the walls have never actually had to defend Lucca from its enemies. The only serious enemy to have threatened the town is the River Serchio when, in 1812, the water level rose to a dangerous height and Lucca risked being flooded. On that occasion, the mighty doors were closed hermetically, allowing Lucca to remain dry.

During the reign of Maria Luisa, in the first half of the 19th century, the Royal Architect, Lorenzo Nottolini, was commissioned to transform the walls, making them into a sort of park accessible from all parts of town. With his usual taste and simplicity, Nottolini made the route along the top of the perimeter of the walls into a shady walk. The walk provides a delightful experience which the visitor should not miss, with its beautiful, centuries-old trees which create shade in summer and the wide range of views it offers, not only of the town centre but also of the Pisa mountains to the south, of the Apuan Alps to the west, of Bagni di Lucca and the Garfagnana mountains to the north, and of the famous country houses to the east.